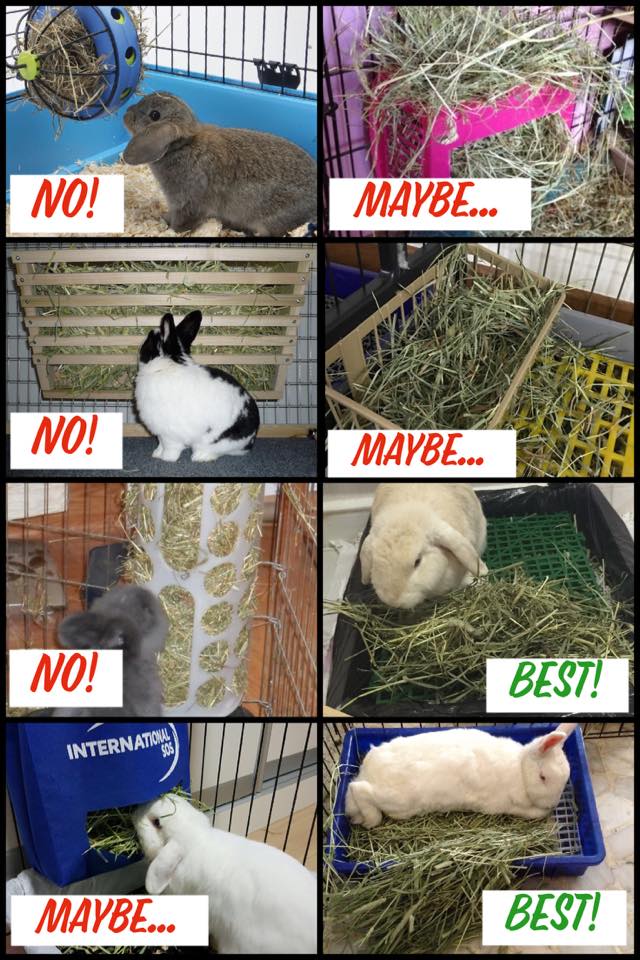 We all know that hay is super important for a rabbit’s diet. In addition to the quality and type of hay that can affect their appetite, the way it is served is also very critical! Today, we will share some yays and nays on the various ways to feed hay!

We have seen some incredibly silly designs such as hay balls and hay racks that are totally not designed by rabbit owners! The poor bunny struggles to pull out 1 tiny strand of hay and had to do so much work just to eat something so important. If you are the rabbit, you will stop eating too!

Creative ideas such as the ikea holder does have bigger holes to make it easier but they can pose as safety hazards if a rabbit’s head or paw gets stucked. Hanging a bag to contain the hay is a rather interesting idea as long as your rabbits don’t chew on the bag itself.

Baskets are a good way to contain hay if they are low-lying and do not have sharp edge. However, we have definitely heard of bunnies who crawl into their hay baskets to pee and poo which can end up being more of a hygiene issue!

At the wonderland, we rather our hay goes loose! Rabbits naturally forage on the ground for food and pick the most delicious hay. Leaving them in the litterbox is the most organic and convenient way for them, even when they are sleeping! So don’t get too fussy about cleanliness and just do what it take to help your rabbits stay healthy!