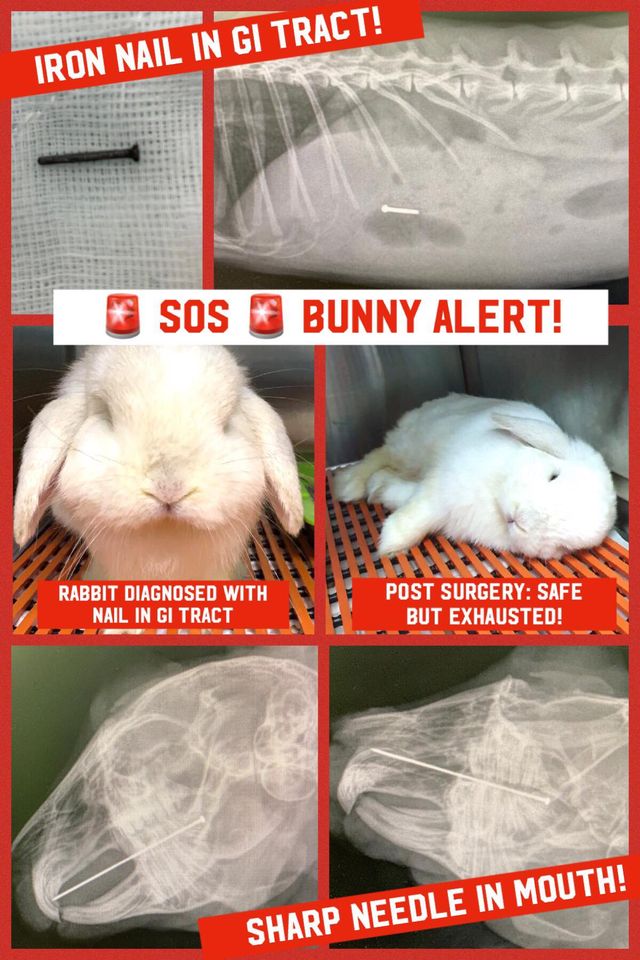 Hay makes up over 80% of our rabbit’s diet and it’s a daily affair for owners to reach into a hay bag to top up their tray. However, we may not diligently look into the bag for foreign objects. While the odds are low, Dr Cathy Chan of The Animal Doctors, Singapore, who consults rabbits on a daily basis, have her fair share of ‘dangerous’ moments.

Past Friday, a rabbit was brought in as it has not been eating and was producing black stools. Dr Chan initiated the investigative protocol and through the X-ray (top 2 photos), they found an iron nail in the GI tract. The black stools were likely due to internal bleeding (aka malena). The rabbit was immediately operated on and despite a very invasive procedure, it was a success and the rabbit was saved.

According to Dr Chan, it is not uncommon to find rabbits displaying signs of ‘GI stasis’ as a result of foreign object ingestion. However, it can be extremely dangerous if the objects are hard and sharp such as iron nails or sharp needles (bottom 2 photos) which can penetrate and cause significant injuries such as internal bleeding to the rabbit.

During the chats with owners, it was concluded that most of these objects are introduced through the hay. As hay is a product obtained from natural sources, it is not unusual for foreign materials to make its way into the bales during the harvesting or packaging process. Dr Chan and BW will like to share some precautionary tips with all owners:

1. Ensure hay are well-sifted to remove foreign objects prior to feeding.
2. Purchase hay in its original packaging which has higher quality control over re-packaged hay.
3. Bunny-proof your home to make sure small and hard objects such as nails, needles, coins and plants are out of reach. This is especially important for unsupervised free-roaming rabbits.
4. If your rabbit is displaying signs of GI discomfort (not eating for >8 hours, lethargy etc), bring it to a rabbit-savvy vet for a thorough review. Radiography is essential in the case of a foreign object ingestion.

We hope the above sharing can keep rabbit owners informed on how to prevent a dangerous moment like this. While the odds are low, it is worth taking precautionary measures to ensure the safety of our pet rabbits. It is truly our duty and responsibility to protect our pets!