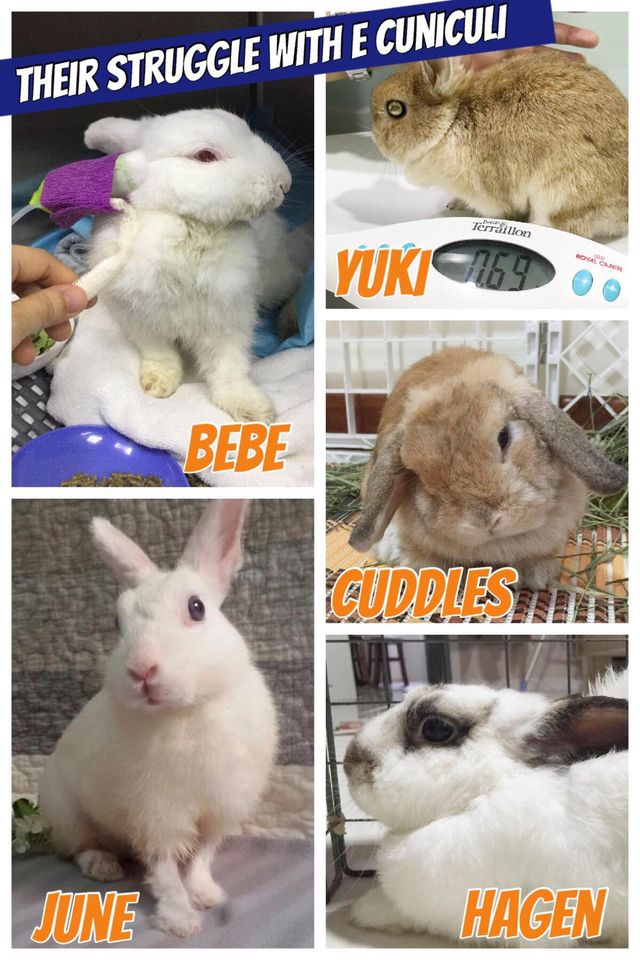 E Cuniculi is almost impossible to prevent especially for us in Singapore. It is also difficult to diagnose as the clinical signs varies. As rabbit owners, we should be familiar with how E Cuniculi can affect our rabbits. Here are some case studies we have experienced in Bunny Wonderland:

1. CUDDLES WITH HEAD TILT
Her owner wanted to put her down when she developed a head tilt due to E Cuniculi. We took over her care and in addition to medication, gave her a clean and peaceful place to recuperate. She recovered within months and was soon bouncing around. She eventually found a loving home and is now living happily with 2 other bunny siblings.

2. BEBE WITH SPLAYED LEGS
Her owner found her appetite reducing and observed severe weight loss over the past month. Her legs started splaying and the owner treated her for GI stasis. 2 days later, BeBe collapsed and was rushed to the vet. Sure enough, she was tested positive for EC. Unfortunately, delayed treatment resulted in kidney failure and BeBe passed away.

3. JUNE WITH SEVERE SCABIES
June was found abandoned with severe scabies. Due to exposure to such a stressful condition at a young age, her immune system was compromised. E Cuniculi took the opportunity to attack her neurological system. She had a few episodes of seizures and is currently on long term dewormer. Other that that, she lives like a normal rabbit who loves her food and her playtime.

4. YUKI WITH JUVENILE CATARACTS
Yuki was rescued from a young breeder. She was a ‘badly made’ ND as she was much weaker and smaller in size. We knew she has E. Cuniculi as she have cloudiness in her eyes (juvenile cataract). Over the years, she developed health issues including blindness, seizures and heart disease. She is living well with her loving foster parents who brings her for regular vet reviews and give her long term medication.

5. HAGEN WITH DENTAL DISORDER
Hagen was rescued from a closing pet shop with over 40 rabbits. The overcrowded condition exposed her to E Cuniculi. She showed no sign for 3 years until her dental condition deteriorated. Despite treatment, she grew weak and E Cuniculi started attacking her kidney. She eventually passed away due to kidney failure.

While all the affected rabbits displayed different symptoms of E Cuniculi, we hope you saw some commonalities in all the cases we shared. Do think about these cases and learn from them. We will share more in a later post to address some of these common themes and how we, as owners, can be more fluent in managing E. Cuniculi.