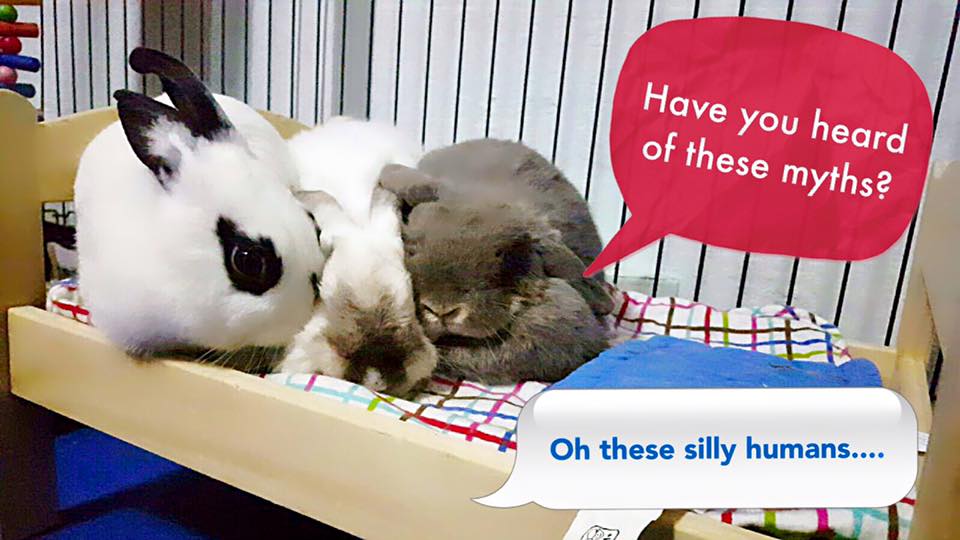 DEBUNKING MYTHS
MYTH 1: A baby rabbit bought from the petshop is the healthiest!
FACT: There is no such thing as a brandnew rabbit! Petshops are driven by profit and they breed as many as possible and sell them as young as they can. Their parents maybe missing an eye and you don’t even know it! Instead, animal rescuers will bring a newly rescued rabbit to a vet and ensure they are healthy before responsibly rehoming them.
MYTH 2: A petshop sells rabbits so they got to know most about them!
FACT: Unless they own a rabbit or two, most petshop staffs are clueless about rabbit care. We have heard all kind of silly advices and even had cases where they gave wrong information and killed a rabbit. When a human is unwell, he sees a doctor. Same thing with an animal. Bring them to a rabbit-savvy vet to ensure you receive accurate information from a professional.
MYTH 3: My house is small so I need to get a small dwarf rabbit.
FACT: While this sounds like it makes sense, it is totally wrong! Dwarf rabbits are known to be super energetic and needs lots of space to run out their energy. A bigger rabbit such as a giant actually prefers to laze around! However, considering most rabbits are explorers and need ample space to exercise, if you really don’t have the space, a rabbit may not be for you.
MYTH 4: My rabbit will love the expensive 2-level cage I bought for it!
FACT: In the eyes of the rabbit, the $300 cage is just a jail that takes away its freedom and he will hate it for life. The most priceless home for the rabbit is to be able to roam freely like he is part of the family. A cheap fence is good enough to confine it when no one is home. But other than that, they will be the happiest to be able to run freely without being locked up.
MYTH 5: My son is enjoying school holidays so I should get him a rabbit to play with!
FACT: So what’s going to happen to the rabbit at the end of the holidays? What’s going to happen when he is busy studying for PSLE, O levels, A levels, College?!?! A rabbit is a 10-year commitment and it is absolutely nonsensical to get one to fill up some holiday time. A responsible parent should think carefully before obtaining a pet rabbit for his child. Unless you, the parent, have so much free time to take care of another newborn (one that stays a baby for 10 years), don’t get one.