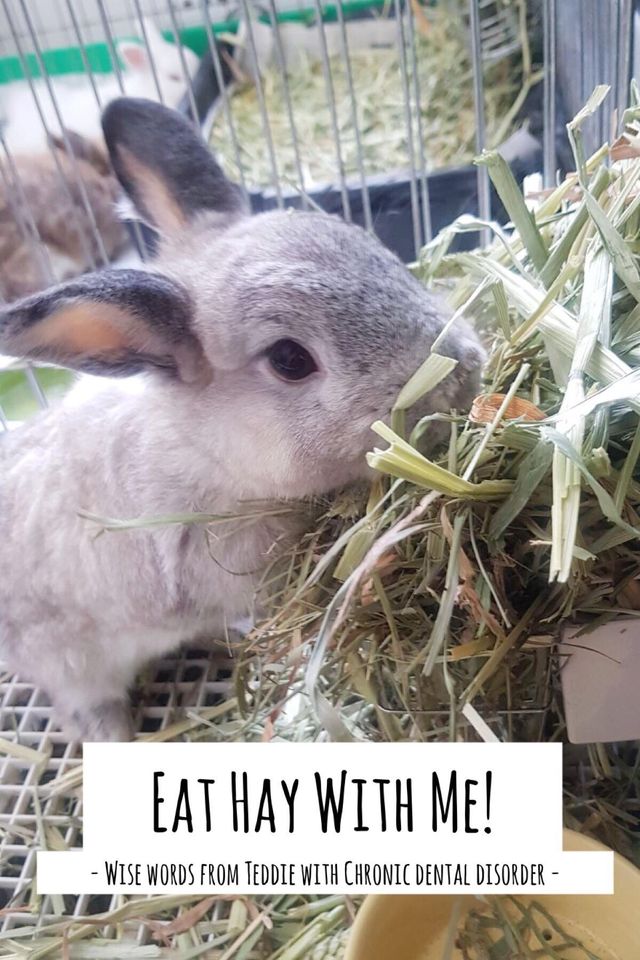 It’s quite common for us to meet owners who are stressed over their rabbits’ fussy tastes with hay. Some have tried over 10 types and their rabbits are still not appreciating hay. While we feel sorry for them, there are, unfortunately, little alternatives. You need at least 75% of hay in their diet to prevent gastrointestinal and dental issues.

It takes patience to improve our rabbit’s hay habit. We have met several owners who successfully converted their fussy buns to healthy munchers. This includes Teddie who has chronic dental disorder but is now a healthy hay baby. We spoke to these successful owners and compiled some of their helpful tips below:

GIVE TIME TO ADJUST
It’s important to give sufficient time for a rabbit to adjust to a new type or brand of hay. Our rabbits are creatures of habits and habits take time to cultivate. Consider offering the new hay in small amount for at least a month prior to concluding if it’s acceptable by your rabbit.

MAKE IT EASY TO REACH
Some rabbits refused hay because it’s too difficult to reach. This is a problem with metal balls and container placed too high or sized too small for their head to fit. It is most natural for rabbits to forage from the ground so we recommend serving hay on the floor, on their litterbox or in a low container next to their litterbox.

MAKE IT FUN
If you have a single rabbit that doesn’t have a big appetite for hay, he might just be bored. Stuff hay in cardboard rolls or twig balls to make it fun for him. Don’t feel embarrassed to shove them in his face and get him interested. He might end up munching a few strands to please you.

MIX IT UP
In the wild, rabbits feed on a variety of grass, straw, herbs and flowers. Similarly, it would be fun to mix in a few types of hay and even a handful of dried treats to spice things up! At the wonderland, we like to mix Oxbow Western Timothy, APD High Fiber Hay and AK Oat Wheat Barley Hay plus a sprinkle of Hay Experts’ Herbs or Burgess Excel Herbs.

KEEP IT FRESH
Hay smells freshest when it first comes out of the bag. Once exposed to our weather, it turns moist and soggy. Our rabbits do have sharp noses so do add in a fresh bunch everytime you walk by your rabbit’s pen to keep things fresh. Dispose hay after 24 hours because they are unlikely appealing.

INSTILL DISCIPLINE
Some rabbits refuse hay because they are too full from the ‘other stuffs’ such as pellets and treats. Some rabbits eat lesser when they free roam 24/7. Instill discipline by curbing their food portion or roaming time. They might not be happy but give them time and they will accept their fate.

If your rabbit do have on-going health issues that affects their appetite (dental, digestion, pain etc.), chewing hay can be uncomfortable. Give them a break and instead, supplement them with fiber-rich food such as hay-based pellets, hay sticks, hay cubes or critical care. When they are better, consider these tips to encourage them to eat more hay and stay healthy!