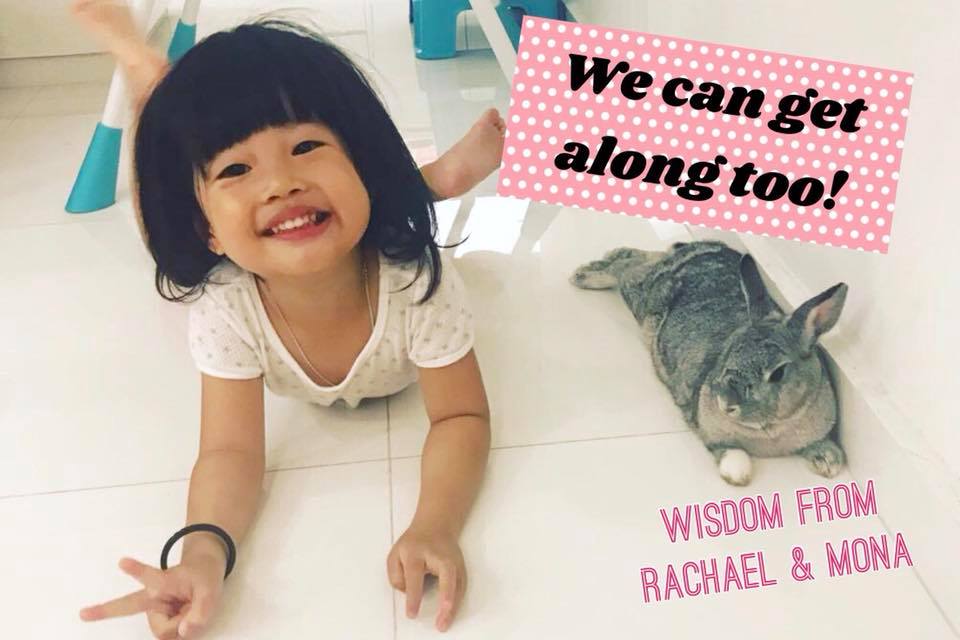 HUMAN RACHAEL & BUNNY MONA
The idea of a rabbit growing up with a child is extremely dreamy. However, many parents do not have the right expectations and ended up giving the rabbit away. As many as 60% of our rescued rabbits were from such cases. We decided to ask Rachael’s parents, Nicole & Neo, to share with us how they care for 3yo Rachael & 1yo Mona together.
Firstly, Nicole & Neo are both animal lovers. They cared for dogs in the past which makes them aware of the commitment and attention towards a pet. While Mona was their first rabbit, they did their homework to understand her needs and ensure it’s within their capacity to manage in parallel to their young child.
Secondly, Nicole & Neo set ground rules for Rachael. The first rule is to respect Mona. If she don’t like to be carried, don’t force it. It’s important to instill a realistic expectation to Rachael and let her know that Mona is a fragile animal and not a cuddly toy.
Thirdly, responsibility should be inculcated from young with the parents as role models. Nicole & Neo perform all the duties that Mona requires including cleaning, feeding and grooming. They involve Rachael and guide her along but it is not expected for a young child to be in charge of a rabbit.
Last but not least, Nicole & Neo see Mona as family. While you may nag when a family member makes a mess, you will still clean up after them because you love them. You will bring them to a doctor when they are unwell and you will do what you can to provide the best for them. Giving her up will never be a thought in their mind.
The decision to acquire a pet is especially important for an impressionable child and it have a significant impact to how they treat animals in the future. We hope that all parents can make mature decisions like Nicole & Neo to instill the correct sense of responsibility and inculcate the right values to cultivate a compassionate future.
For more readings, we highly recommend these articles:
http://rabbit.org/rabbits-and-children/
http://rabbit.org/faq-children-and-rabbits/
http://rabbit.org/are-rabbits-good-pets-for-children/ (Howcast video)